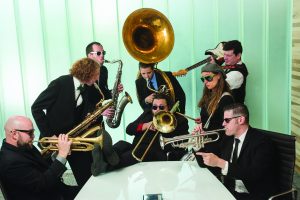 One Love Brass Band is a unique and original brass band that fuses New Orleans traditional styles with the sounds of the Caribbean, specializing in ska and roots reggae.

“One Love Brass Band is all about spreading love through their music and good vibes.” — News with a Twist

Easily the most original and innovative brass band in New Orleans, One Love Brass Band’s debut album Skatober in New Orleans was nominated for a Best of the Beat award for Best Brass Band album in 2014. One Love’s 2016 release Too Big To Fail, sees the band grow and develop their unique style with original compositions. The music video for the title track went viral upon its release, with 10,000+ views in the first week. Recorded at the Ellis Marsalis Center for Music and NOLA Recording Studios, Too Big To Fail also features a track penned by and performed with a special guest, songstress Margie Perez.

One Love has quickly amassed a fan base that appreciates their novel approach. The band has appeared at several local festivals, including the French Quarter Festival, Bayou Boogaloo, Mirliton Festival, Freret St and Caribbean Festivals among others, sharing the stage with Jamaica’s legendary Meditations, Kabaka Pyramid, Dub Gideon, and more, as well as local favorites Hot 8 Brass Band and Big Freedia.

The band was founded in 2013 by drummer Boyanna Trayanova and tenor saxophonist Kyle Cripps. The lineup also includes: Corey Bostic on sousaphone, Asher Ross on trombone and lead vocals, David Bode on tenor and baritone saxophones, Ian Cunningham on guitar, and Mark Levron and Mike Kobrin on trumpets.